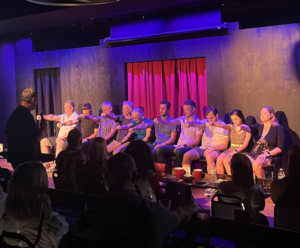 Orley’s show is a concert in hypnotism, bringing to the stage stand-up, improvisation,

and sketch comedy in its true form. The laughter is deafening, and the crowd watches in amazement as their friends and family display some of the funniest bits comedy will ever know. The unbelievable becomes believable before your very eyes. A brilliant comedian, Flip has blended his love of laughter with an extraordinary gift for hypnotism, making his way on countless TV shows from Maury Povich to NBC’s “Today”

“The beauty of Orley’s show is that, because most of the humor comes from the volunteers, no two performances are alike.” – The Los Angeles Times